The first VMworld 2016 day full of sessions, general and otherwise, went down today. Let’s do the run through.

For general session commentary, check out the Live Blog. Overall, I was pleased to see that VMware is looking towards the future and recognizing that they need to interoperate more with the major cloud vendors and not try to compete directly with them. After all, as Pat Gelsinger pointed during the session, as of 2016 there are still ~73% of companies that run a traditional data center and don’t use an IaaS cloud model.

This was a session I was really looking forward to. Unfortunately the VMworld electronic sign board, you know, the ones that list the upcoming sessions and what rooms they’re in, sent me to the wrong room. By that time the sessions were full and no one was getting in, even if they registered. Not a great start to the sessions, but let’s move on.

Masters Duncan Epping and Chris Wahl delivered a great session on enforcing your vSphere Cluster Design state using PowerCLI. Duncan warmed up the audience by giving an overview of  HA and DRS. He had some great tips, such as ensuring that you use admission control when set up HA. This guarantees resource availability for VMs when there’s a host failure. He also made an interesting point about DRS. DRS is a resource broker, and is not really about load balancing resources but more about “making VMs happy”.

There was also a brief overview of virtual networking options, vSphere Standard Switch, vSphere Distributed Switch, etc. One should consider traffic types and requirements when designing virtual switches. Not any one switch fits all use cases.

Chris Wahl took the reigns and bestowed some pearls of wisdom about working towards automation, and specifically Infrastructure as Code:

Vester is an open source project that effectively provides a bridge between vSphere and Pester, a PowerShell testing framework. Vester lets you treat vSphere infrastructure components and features like code by running tests against them to see if they’re operating and configured properly. It helps enforce what Chris referred to as Conversational Configuration. The example given was that he can have discussions about how things should be built through something like GitHub, which provides much greater context and human language communication. Check Vester out, give it a spin, and consider contributing.

VVol and Storage Policy-Based Management ? Is It Everything They Said It Would Be? [STO9054]

This was a joint presentation between Pivot3 and one of their customers, Financial Advocates. The gentleman from Financial Advocates was given the floor at the start of the session and he described the initiatives they went through recently. FA replaced an existing Citrix environment with VMware for their VDI solution. They brought in Pivot3 as the storage solution for this, and recently began using VVOLs. They are now a 100% virtualized environment for desktop workloads, issuing staff Dell Zero Touch endpoints, and all but their Exchange workload is virtualized on the server side. They found that VVOLs made their environment faster and it was much easier to provision workloads.

The customer part of the presentation lasted maybe 20 minutes at most. The gentleman from Pivot3 took over, and after about 15 minutes of pure product pitch, I decided enough was enough and left the session. Note to vendors: The Solutions Exchange is where you make your exhaustive product pitches. I understand if you want to take 10-15 minutes to pitch product at the end of a sessions, but taking 2/3’s or more of the session is just not on.

A great session from Duncan Epping (obviously a very busy fellow) and John Nicholson. Duncan started the session by giving us a VSAN primer. VSAN is an HCI offering that delivers software defined storage that has a distributed scale out architecture and is vSphere integrated. How’s that for a one sentence summary?

VSAN is great for a variety of workloads including VDI, management, dev/test, etc. Most customers are going with all flash deployments of VSAN as the costs of the storage are steadily dropping. VSAN is also potentially capable of delivering 100k+ IOPs, depending on the underlying hardware. It is also capable of sub-millisecond latency, thanks to that same underlying hardware as well as the efficiency within VSAN iteslf. All of the writes and the majority of the reads are served by the flash storage, or caching, tier. It’s good to remember that VSAN is an object based storage platform, not file based.

Make sure that you specify policy fist as it determines how VSAN is laid out and where the data is stored, based on such things as number of failures to tolerate. If you set the method to Performance, VSAN will use RAID 1. For each n+1 copies of the data you need, you will require 2n+1 hosts. Also make sure that you create fault domains that mirror your physical environment to increase data availability. Duncan referred to this as “rack awareness”. Set your HA isolation response to “Power Off” for VMs in almost all cases. Otherwise your VM may hang indefinately while the guest OS tries to shut down without its underlying storage being available.

Easily my favourite thing of the day. It set a high enough bar that, at this point, it stands a really good change of ending up my most favourite thing of the conference. Five teams of friends and strangers got together to each tackle a programming challenge. Anecdotally it seemed like the majority of the people in attendance did not actually code as part of their day job, but this made the event all the more interesting. I was part of team 5, a.k.a. Team Ohhhh Snap! My teammates and I, led by captain Matt Brender, were working on the challenge of pulling metrics, in this case we chose VSAN operational metrics, using the Snap open telemetry framework, into a InfluxDB, then rendered as a set of dashboards via Grafana.

It was a lofty goal and one that we’d didn’t completely succeed at, given both the time frame and our inability to marshal our attention towards a cohesive plan, however we did accomplish portions of it and left feeling like we learned a heck of a lot. Both about code and community. I really hope VMware{code} puts this event on again next year. I’ll sign up in a heartbeat. 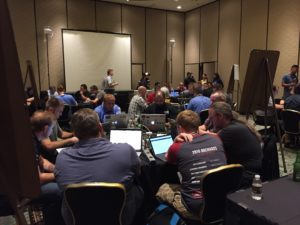 Put a Bow on It

That’s VMworld 2016 US Day 2 done. We’ll be back with Day 3 coverage. As there’s another General Session Tuesday morning, we’ll be bringing you another love blogging. Stay classy VMworld.