Less than a week to go until VMworld 2016 US and the vExpert offers are just starting to trickle in. Here are the offers that have come in so far. Stay tuned, as you’ll find new offers in this post as they roll in.

We’ve been very fortunate that vendors in the virtualization space have been kind enough to recognize vExperts through tailored webinars and offers. Over the years they have been very generous. Given current economic climates around the world I was not expecting many vendors to be able to offer vExperts too much, and there haven’t been too many announcements thus far. So, I’m extra appreciative of the vendors that have found and justified the means to continue to support the vExpert community. Kudos!

No sooner had this post headed out the door than Catalogic announced their vExpert VMworld offer. On offer is a “vMaester Chalice” which looks like a nice stainless steel mug. After registering, visit Catalogic’s booth (#721) to pick up your chalice. Just make sure that you get the chalice from the palace that has the brew that is true, and not the pellet with the poison in the vessel with the pestle.

Apparently an email is making the rounds letting vExperts know what Cohesity has in store for them (your’s truly hasn’t seen the alleged letter first hand yet). If you make to Cohesity’s booth (#827) you could pick up, while supplies last, a Timbuk2 Q Backpack with vExpert (and Cohesity) logo stocked with goodies. What goodies? Why, a 32GB USB flash drive, charging cable, 1000 mAh battery pack and a smart, green, Cohesity water bottle made by Contigo.

Here’s an apparent photo of the alleged loot that may, perhaps, be available in limited quantities (source: vmblog.com): 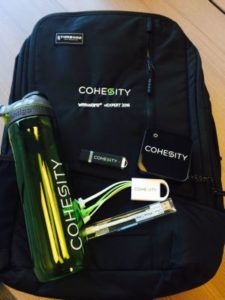 Have a hole in your t-shirt drawer and have a burning want to speak about the VMware community on video? Stop by Datacore’s booth (#2406) to deal with both of those things! Datacore’s offering a limited edition vExpert t-shirt, along with the opportunity to wax poetic on video for an “up and coming special feature”. Oh so mysterious!

Jan Schwoebel popped into the VMworld vExpert Slack channel to let us in on Datrium’s vExpert offer at VMworld. The first 200 vExperts to register on Datrium’s offer page will be able to pickup a Raspberry Pi3 with a custom Datrium case. After you’ve been confirmed as registered, stop by Datrium’s booth (#2301) at VMworld US. 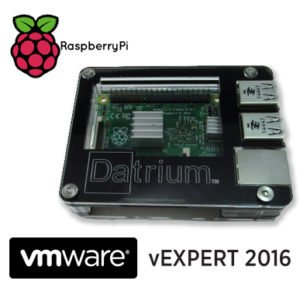 This one’s a bit… ambiguous. It’ll take a bit of a leap of faith as Docker’s vExpert offer isn’t exactly clear.

First, you register for a vExpert VIP Docker session. You can choose from sessions on Monday, Tuesday or Wednesday.

Second, you attend the session you registered for at the Docker booth (#2362). With me so far?

Third, and probably most importantly, you now “have the opportunity to receive some limited edition vExpert Docker Swag!”. See? Ambiguous. But, it could be totally worth it. After all, it’s container darling Docker. They’re pretty cool.

Originally teased in a blog post, NetApp Solidfire’s vExpert gift debuted at the annual VMworld vBeers meetup. They have produced another set of Cards Against Humanity. As you can see, the deck’s already sparking some discussion on the Twitters.

Dropping like a kick to the head right now at #vBeers: @solidfire's #vExpert giveaway for #VMworld. pic.twitter.com/QCu683xPLk

The @solidfire folks have hit another home run. #vExpert pic.twitter.com/vvpm4KEml3

Be sure to stop their booth (#1535) to pick up a deck. That’s the NetApp booth. Remember they’re part of NetApp now. Yes, that NetApp, which other one is there?

While not advertised very loudly, Nimble seems to have a few things available to current vExperts. Visit them at their booth (#1931) to pick up a vExpert shirt (not clear yet if it’s a tee or a “real” shirt like a polo) as well as a Grid-It. Grid-Its are fun. Do you have cables and flash drives and battery packs that you carry around with you to survive travel and events like VMworld? You need a Grid-It. Thanks Nimble, that’s a very practice and appreciated pair of gifts! Update: It’s a t-shirt, and does have vExpert on it.

If you come across any more VMworld 2016 vExpert offers, let me know in the comments or on Twitter and I’ll add them to the list. Remember that vExperts, as well as VCPs, VMUG members and more, can enjoy Not for Resale (NFR) software licenses year ’round.

As always, while most vExperts aren’t in it for the goodies, we appreciate the support that companies such as these give to vExperts. Fostering the vExpert community helps foster the entire tech ecosystem.