Day 3 at VMworld started with a little blog experiment, proceeded on to some sessions then a few meet ‘n greet events highlighted by the vExpert reception.

So, as mentioned, I tried live blogging. While real-time live blogging didn’t pan out, I queued up the live blog notes and posted them shortly after the session finished. It was an interesting way to work, and I was helped tremendously by having access to the Blogger tables available in the Hang Space.

Go check out the General Sessions summary on it’s own page. 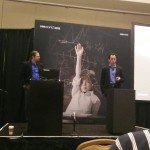 Are there any questions? Yes, you in the back.

John Hubbard and Ken LeTourneau of Intel presented the results of a challenge/request brought to them by VMware: can Intel build a 64-node VSAN cluster. After some consideration, the Intel team decided to tackle it and did manage to build it.

Key to the success of this project is the exclusive use of NVMe compatible SSDs. NVMe is an open standard specification for interacting with SSDs. The performance characteristics are much more even keeled than other specifications as it scales. That means, as example, that as total IOps increases, latency remains relatively level (there’s no spike). NVMe has 80+ companies on board driving and using the standard and it could arguably be considered the SSD for enterprise drives.

The solution ended up fitting into two racks and having 368TB of usable space, which you can see on display at the VMware booth in the Solutions Exchange. It’s running just slightly north of 64,000 VMs though interestingly they couldn’t all be used for performance testing with Iometer. Iometer has an inherent limit beyond which it’s difficult to scale, so Intel settled on designating 128 VMs as “performance VMs” for the testing. Their results are still relatively early and they suggested that more comprehensive results would be coming, hopefully soon.

Here are a few tips from their work that helped them achieve this feat:

When John was asked what the key takeaway should be, he suggested that above all you need to know the problem you’re trying to solve and design for that. Excellent advice.