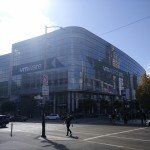 Away we go! Unlike last year, there wasn’t really anything blog worthy on “Day 0” (Saturday). There was a VCDX Bootcamp scheduled for Saturday morning, however I arrived in SFO in the afternoon and had attended last years any. So Saturday was a travel, register and settle in day.

My Legs Hate Me 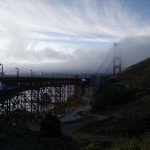 It was a great run across the iconic Golden Gate Bridge (note the caps; yep, it’s a big deal). A big thank you to the organizers for putting this together and incorporating the bridge into the run, they do a fantastic job!

I did find out, though, towards the end of the run that I could literally feel the lack of running practice I’ve put in lately. Sorry legs and feet, maybe we’ll prep better next year.

Even though this is only its second year, the #VMunderground Opening Acts feels like the official kick-off for VMworld. This community driven event delivers three pairs of panel discussions. I sat in on the Infrastructure and the Automation & Orchestration panels this year. They were excellent, same as last year. 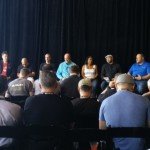 The Infrastructure panel started off with some open direction, mainly “talk infrastructure”. That got the panel going and soon we had an interesting set of opinions on what infrastructure is and where it should go. Some of the opinions and thoughts of note included:

The conversation converged and wrapped up on Software Defined everything (SD*), pointing out that software is abstracting pretty much all infrastructure, and that’s not a bad thing.

The Automation & Orchestration panel started off with a discussion that highlighted that community is a potential path to learning and achieving your automation goals. There are many resources with great advice and scripts that you can refer to and learn from. Especially Luc Dekens’ blog. Opinions and thoughts:

I stopped off at the Hands On Labs, partly to give my legs a break, and partly to say hello to Noell Grier of CloudCred. Who else was at the booth but fellow Canadian CloudCredian @virtualquebec!

I finished up the evening spending a few hours at the #VMunderground party. A gathering of community minded folks with no agenda, just good company and conversation. Thanks to everyone that puts on that fantastic event and to the sponsors who help make it happen.

VMworld starts off at a run and the pace won’t slow down from there! Tune in for more summaries of the days ahead and find out if my legs are still ready for any.