I only  managed to stay for part of the presentation here, which was basically like a VVOLs primer. I’m sure there were interesting NetApp specific VVOLs implementation topics covered towards the end. Thankfully the sessions will be available online shortly after the conference.

As I was fortunate enough to be added to the vExpert 2015 roster just before the conference, I was invited to attend the vExpert Reception and it didn’t disappoint. It was more than just a meet ‘n greet (a party with an agenda, imagine that!) and we were given an overview of a couple of VMware initiatives. Jeff Spicer, VP of Digital Marketing who, we were told, “runs all of VMworld”give us a quick overview of the digital transformation of marketing and what companies are facing getting their message out to customers new and old.

Corey (@vCommunityGuy) Romero took the stage next and gave us a sneek peak into what they’re planning for vExpert 2016. Essentially they’re going to try to increase engagement and engagement opportunities for vExperts so they can both get timely access to information as well as keep track on how their interactions are contributing to the community. Keep an eye out for the vExpert 2016 nominations, which could happen as early as this November.

Karvl Chiles and Paul Sorensen followed and gave us some highlights of the VCDX program. As of yesterday there were 202 VCDXs world-wide, about 50 of whom hold two VCDXs (there aren’t any 3+ holders yet). VCDXs will be receiving a complimentary 12-month subscription to the VMware Learning Zone and it’s hoped that they’ll enjoy the content enough to want to contribute some themselves.

Receiving enthusiastic applause, Pat Gelsinger (now on twitter @PGelsinger), VMware CEO took time out of his busy schedule to share a story or two and say some kind words for vExperts. You get the impression that Pat genuinely sees the value in the vExpert program and is looking forward to symbiotically working with the group for years to come.

Last, but not least, Chris McCain of VMware’s Networking & Security Business Unit (NSBU) came out to talk to us about NSX and the NSX certification program. He made a very interesting announcement that got a lot of people’s attention: Over the next year, the person most actively blogging about NSX will be awarded a free seat in the vNinja program. If you haven’t heard of vNinja it’s an amazingly intense boot-camp that prepares you to defend for the VCDX-NV. There should be a lot of interesting NSX blog posts coming out over the next several months…

Of course, the vExpert Reception is also an opportunity to mingle with other vExperts, some VCDXs and VMware folks. I was able to chat with friends both old and new and had some great conversations.

It wouldn’t be a night during VMworld without some vendor and community parties. I managed to make it out to the Veeam and vBacon events, both of which were well done, thank you!

That’s it for today’s VMworld summary. We’ve got the session heavy Wednesday ahead which is capped by the VMworld Party, as well as the Thursday wind-down where we get one last General Session and some of the venues like the Solutions Exchange and Hands On Lab close down for the year. 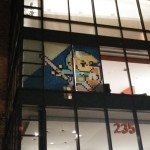 I’ll leave you today with what appears to be some awesome sticky note art I saw while out and about. Think of it as a little easter egg for those of you who made it all the way here.